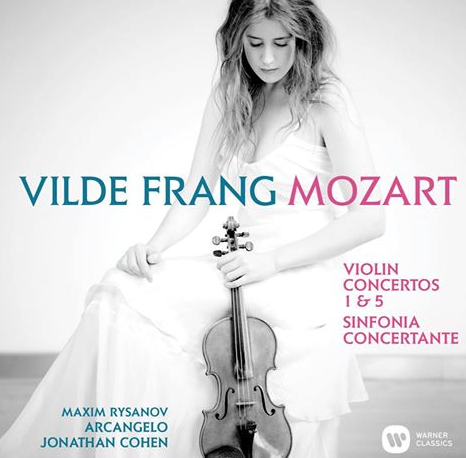 If the Norwegian violinist Vilde Frang metamorphosed into an animal, I think it might be a field mouse: something delicate, unshowy and very good at scurrying. She does a lot of that in this concerto album, which turns away from her usual repertoire (late romantic, early modern) in favour of the 18th century. When her mentor Anne-Sophie Mutter recorded Mozart’s concertos in 2005, the fruity emotional throbbing in the playing was remarkable.  http://www.thetimes.co.uk/

Following the success of her discs of Romantic violin music, Norwegian violinist Vilde Frang has recorded Mozart’s Concertos Nos. 1 and 5 ‘Turkish’ and the Sinfonia Concertante K364, showing off her expertise in the Classical repertoire.

In 2012, Frang did an orchestral tour of Asia conducted by Jonathan Cohen in which she performed Mozart‘s fifth violin concerto. Their performance was a great critical and popular success and now, they have committed the vibrancy of their collaboration to disc. Cohen’s exceptional chamber orchestra, Arcangelo, makes for the ideal partner, joined by violist Maxim Rysanov in the Sinfonia Concertante.

Frang’s playing is extrovert and confident and still tends to the Romantic, making for an interesting combination with the authentic instrument approach of Arcangelo. Some of the very best versions of Mozart’s timeless masterpieces.

Following a number of recordings of Romantic repertoire on Warner Classics, Norwegian violinist Vilde Frang turns her attention from Prokofiev and Sibelius and Tchaikovsky and Nielsen to Mozart. Accompanying is the impressive chamber orchestra Arcangelo directed by Jonathan Cohen, its founder and artistic director. Cohen informs me that Arcangelo play using aspects of period performance practice. Gut strings are fitted and natural horns are included in the complement even if modern oboes are used. Soloists Frang and Maxim Rysanov play instruments fitted with modern strings and set-ups. Read more