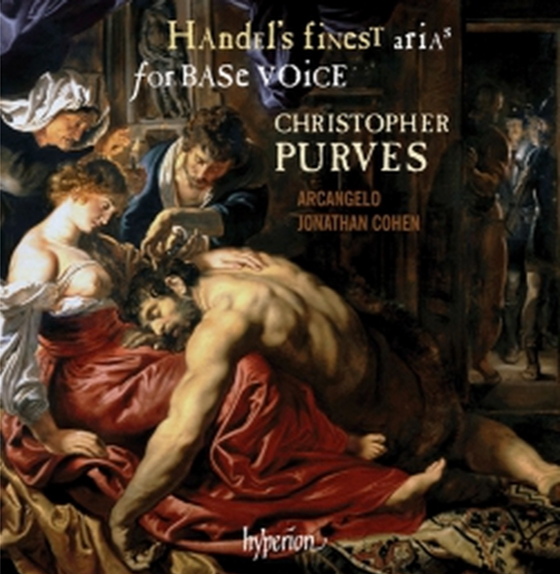 ‘Purves’s flair for specific characterisation enlivens every number on the disc. Egged on by Arcangelo’s splenetic strings, he works in himself into a rage worthy of Boschi in an aria from Riccardo Primo. Coloratura, here and elsewhere, is always precisely focused, wide leaps cleanly negotiated at speed … Jonathan Cohen and Arcangelo savour the rich string textures here, typical of their feeling for colour throughout a recital that pays eloquent tribute to Handel’s boundless invention in composing for bass voice’

‘Christopher Purves gives us masterful, dazzling and powerful performances of scenes from 15 of the composer’s dramatic works, lithely and splendidly supported by up-and-coming ensemble Arcangelo and conductor Jonathan Cohen. In short, this is the most outstanding album of its kind I’ve ever heard from any singer’

‘The full strings of Arcangelo are truly lively in Handel’s music, and admirable playing is heard from wind soloists … Cohen proves again that he and Arcangelo are convincing and winning exponents of Baroque music … Many of these selections resemble a roller-coaster of notes as the musical line rises and falls … and Purves produces an overall coverage that I do not remember having been bettered’

‘Purves is a singer in a million. The English bass-baritone owns both the physical equipment and the artistry required to transcend the technical demands set by Handel for equally extraordinary performers from his day … Of course you’ll smile in wonder as Purves spans almost three octaves, from regions usually inhabited by wimpy tenors to subterranean depths … Purves belongs to the Handel superleague when it comes to sheer variety of tonal nuance and expressive shading … The singer gives a masterclass in exploring the psychopathology of Handel’s characters while revelling in the apparently inexhaustible genius of the composer’s invention … His interpretations come to life in partnership with the gloriously unbuttoned period-instrument band Arcangelo under its charismatic director Jonathan Cohen’