Arcangelo & Christiane Karg (Soprano)
Back to all albums

German soprano Christiane Karg shot to prominence following her 2006 debut at the Salzburg Festival. In 2009, the periodical Opernwelt voted her Newcomer of the Year in the female singer category, and she received the ECHO Klassik award for her first song CD, ‘Verwandlung’, the following year. Christiane worked with Jonathan Cohen in the Glyndebourne Touring Opera in the 2010/11 season, from which this recording project arose. On ‘Amoretti’, Karg and Arcangelo take the listener on an emotional roller coaster ride that begins with a tender plea and leads via yearning, tenderness, pain, and despair to the final Adieu. Alongside arias by Mozart and Gluck, there are two lesser-known ones by their French contemporary André-Ernest-Modeste Grétry, one of which is presented on CD for the first time.

“…an extremely attractive potpourri – and it’s extremely attractively executed by Christiane Karg…she’s an expert technician with a lovely bright voice. She is also a responsive, intelligent mood-creator and stylist…these polished performances, excellently supported by a British conductor and period band, should give much pleasure.”

“The Gluck items are all done with style but it’s the airs by Gretry that make the disc so desirable. Listen to the excerpt from Silvain, a complete scena only five minutes long, and you will be hooked.” 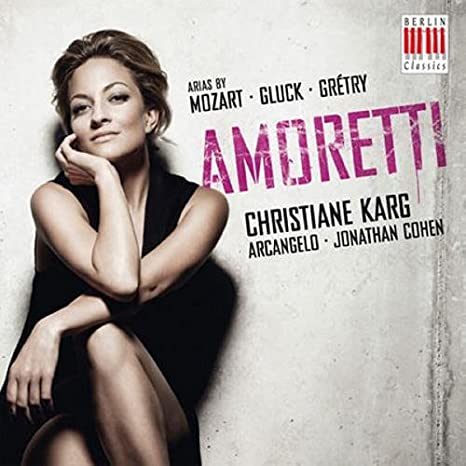