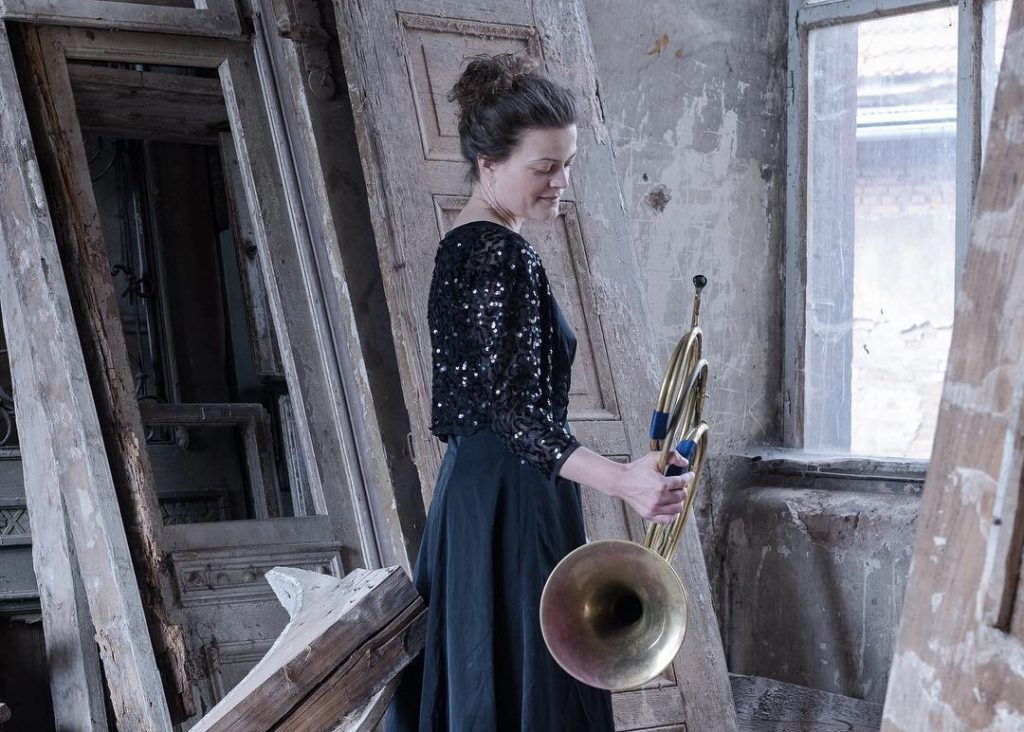 Ursula Paludan Monberg is recognised internationally as one of today’s leading players of the natural horn. The instrument is readily associated by Early Music audiences with its obbligato role in prominent arias like ‘Va tacito’ (Handel Giulio Cesare), and eagerly anticipated in joyous choruses (Bach Mass in F). But the horn also has a “gentle soul” and enjoys a wealth of little-known chamber repertoire, which Ursula explores in her new recording with Arcangelo. We spoke with Ursula to find out more.

Where did the idea for this recording come from?

I was approached by a group of incredibly generous sponsors wishing to sponsor a CD with me, that’s the sort of thing one can only dream of – I’m so very grateful! I’ve played with Arcangelo and Jonny since the start and of course thought it would be the dream scenario to be able to record this with Arcangelo, but also thought that a horn disc with slightly geeky repertoire might be too much to ask. But I asked Jonny for his advice about it, and showed him all those geeky repertoire suggestions, and to my great joy he said ‘well of course you are doing that with us!’

Where did you find the repertoire?

The two anonymous works and the two pieces by Carl Heinrich Graun are from a very interesting collection held at the library of the University of Lund in Sweden and originally gathered by the 18th century Swedish musician Christian Wenster. Horn players everywhere can be grateful to Mr Wenster, as he copied these scores from originals held at Dresden which were then destroyed in the 20th century.

How difficult was it to select the final programme?

There are 18 concertos in the Wenster collection, so as you can imagine it was quite hard to choose! For this recording we chose four in an intimate setting, but there is lots of repertoire to explore in a next volume. We then chose non-Wenster items from the other repertoire of the period, to balance the programme: the Mozarts (Leopold and Wolfgang Amadeus) bookend the disc and there’s works by Joseph Haydn and Georg Philipp Telemann in there too.

Did the recording sessions change your perception of any of the pieces, or composers?

Yes, surprisingly it was the Telemann trio sonata that changed most for me during the sessions. It’s the piece I’ve played the most, but in the session it developed a real intimacy and fragility that I was very taken by and it made me love the piece so much more.

Which moment on the recording are you proudest of?

I have to say the cadenza in the Haydn divertimento… I had always intended to improvise my cadenza, but imagined that in the session I’d probably need to do quite a few and then choose the one I liked the best. What happened, in fact, was that on the first take I improvised the cadenza and that was that, that’s the one that’s on the disc! What you can’t hear or see is that after the two cheeky bottom Cs that I played at the end of the cadenza Micha (Gurevich; violin) and Andrew (Skidmore; cello) had to suppress their giggles to finish the movement and that makes that moment extra special to me.

What was it like to work with Jonny on the recording?

Jonny is always very playful in rehearsals, concerts and recordings, but in recording sessions in particular it’s an incredibly special skill. It makes a huge difference to the music-making and the atmosphere in the room and on the recording you hear it in all his wonderful ornaments.

How do you want this recording to change people’s perception of the horn?

What I particularly enjoy about all of the works on this disc is that the horn is allowed to play as an equal with all the other instruments. While it has its roots in the great outdoors, in this repertoire all the composers are exploring its gentle soul and allow it to sing.

‘The Early Horn’ with soloist Ursula Paludan Monberg and Arcangelo directed by Jonathan Cohen is available to purchase on CD/Download now on Hyperion Records. Click for more information.