Arcangelo and Christopher Purves have been nominated for a 2019 Gramophone Award for their second album of Handel arias.

Featuring arias and characters from lesser-known Handel works like Siroe, Tolomeo and Belshazzar, ‘Finest Arias for Base Voice, Volume 2′ won widespread acclaim on its release in July 2018. BBC Music Magazine praised Purves as the “ideal interpreter”, Opera Magazine commended the bass-baritone’s “bold, confident singing” and “considerable sensitivity”, and The Sunday Times enjoyed his “immaculate diction and fluent collaratura.” It was Richard Wigmore in Gramophone Magazine, however, who declared himself particularly impressed: read his full review here.

Now Arcangelo is delighted to announce that ‘Finest Arias 2’ has been nominated in the Recital category for a 2019 Gramophone Award, alongside recordings by Phillipe Jaroussky, Ian Page and The Mozartists, Jodie Devos, Jakub Josef Orlinski and Elsa Dreisig. The winner will be announced at the Gramophone Classical Music Awards ceremony in London on 16 October.

Jonathan Cohen said: I’m glad that our exploration of these varied Handel bass roles with the inimitable Chris Purves on Hyperion has brought pleasure to listeners. I am grateful to everyone who contributed to the album, in particular to the superb players of Arcangelo.”

2019’s nomination is the latest success in a remarkable run of form for Arcangelo at the Gramophone Awards, including two previous wins (2017 and 2012, both with Iestyn Davies) and four previous nominations or finalist positions (2018, 2016, 2015 and 2012). You can see our full discography here.

Full information about the album, including a scholarly article by Handel academic David Vickers, can be accessed for free on Hyperion’s website, which also offers the album and individual tracks as audiophile quality digital downloads.

‘Handel: Finest Arias for Base Voice Vol.2’ is also available to buy or download from Presto Classical. 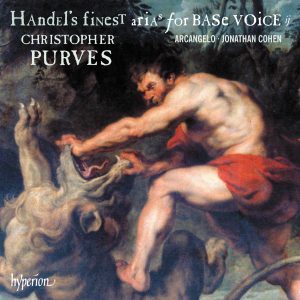